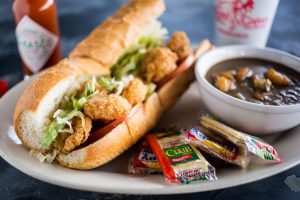 Fried Shrimp Po-Boy served with a cup of Gumbo and Drink.  $16

Order the “Cuz We Care Combo” in the month of October and 10% of each meal will go to a local charity organization.

BRIDGES TO LIFE (BTL) is a faith-based restorative justice program for incarcerated men and women that provides a platform for life-changing transformation. Starting in one prison in Richmond, Texas, with 41 inmate graduates in 1999, over 47,000 men and women have graduated from the BTL program in 163 prisons and alternative facilities.

Founded by native Houstonian John Sage in 1998, BTL was born out of an unspeakable tragedy: the murder of John’s sister Marilyn in 1993. In the wake of this devastating event, John realized the terrible toll it had taken, not only on his family’s lives, but also on those of his sister’s friends, co-workers, and community.

As he searched for spiritual answers to his grief and pain, John began volunteering for a prison ministry where crime victims shared their stories with offenders and saw compassion born in them as they awakened to the impact of their actions. After experiencing the powerful restorative effect of this process on both the offenders and victim volunteers alike, and wanting to expand it to others, John developed the Bridges To Life program.

Based on the principles of restorative justice, the mission of Bridges To Life is to connect communities to prisons to reduce the recidivism rate (particularly that of violent crimes), reduce the number of crime victims, and enhance public safety. The spiritual mission of Bridges To Life is to minister to victims and offenders in an effort to show them the transforming power of God’s love and forgiveness.

Visit https://www.bridgestolife.org/donate to learn more about how you can donate and help Bridges To Life.

ABOUT CUZ WE CARE

The Cuz We Care program was started in spring 2014 as a way to maximize Ragin’ Cajun’s philanthropic efforts and create a giving-program that could continue on for years to come. As a family-owned company, Ragin’ Cajun knows it is important to pay forward our good fortune by giving back to our neighbors. Our giving focus is on 501(c)3 organizations serving the needs of children and families through medical research, educational support or the provision of basic needs.

Through the Cuz We Care program, Ragin’ Cajun will host one profit-share per month with a nonprofit that fits within the scope of our mission of serving the needs of children in Houston. A Cuz We Care combo will be designated for an entire month and any time a customer purchases the item, 10% will go directly back to the partnering nonprofit.

It is our goal to substantially impact 12 children’s charities throughout the year, and bring them together in December for an event highlighting all that they do to keep our communities happy and healthy.

If you would like to participate in the Cuz We Care program, please fill out the form below and a representative from Ragin’ Cajun will be in contact with you soon. Additionally, if Ragin’ Cajun can support your cause in other ways, please let us know. 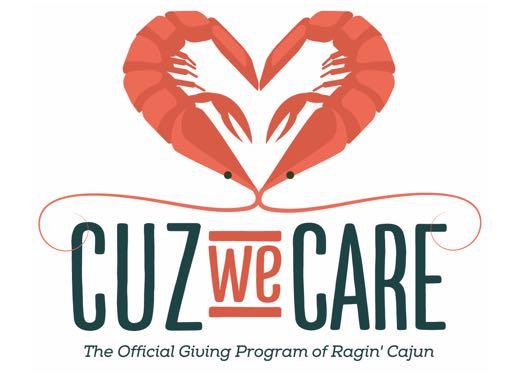 At Ragin’ Cajun, we believe in giving back to the communities that give us so much.